MIT researchers have demonstrated a wearable power generator that uses the difference in temperature between your skin and the surrounding air – even just a couple of degrees – to produce a small, steady flow of power to run your medical monitor or your Bluetooth® headset. No need for a battery.

In the wearable power generator, a commercially available “thermal harvester” turns the temperature difference into electricity, but the generated voltage and current are tiny. The MIT solution: a novel “interface circuit” that boosts that tiny voltage to a useful level, keeps it constant despite temperature changes, and delivers the highest-ever fraction of the power from the harvester to the device.

“Energy harvesting, in which energy is gathered wirelessly from temperature differences, vibrations, or other ambient sources, is an emerging technology that offers the promise of wireless powering of electronics indefinitely,” says Anantha P. Chandrakasan, the Joseph F. and Nancy P. Keithley Professor of Electrical Engineering and director of the MIT Microsystems Technology Laboratories. “This technology directly addresses today’s energy challenge by generating clean energy in a highly distributed manner.”

Chandrakasan, Yogesh Ramadass SM ’06, PhD ’09, now an electrical design engineer at Texas Instruments (Dallas), and their colleagues have been working with a harvester that uses a thermo-electric material – a type of semiconductor in which a temperature difference between one side of a sample and the other produces electricity. Most work to exploit this effect focuses on generating power from temperature differences of tens to hundreds of degrees, for example, to run industrial monitors and sensors. 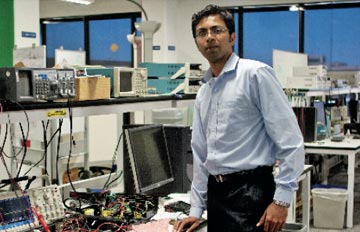 In general, there is a temperature difference between the surface of a person’s skin and the ambient air (unless the air is exactly 98.6° F). A thermoelectric device worn on an arm or leg could use that difference to run wearable devices such as medical monitors, toxic gas sensors, and portable communications and video gadgets.

Until recently, that scenario was just a dream because such devices needed far more power than a wearable thermal harvester could produce. But over the past decade, the power consumption of such electronic devices has been reduced by a factor of 10 or even 100. “That’s low enough that one can envision using an energy-harvesting system and eliminating the battery entirely,” says Chandrakasan.

Even so, the output from a harvester can’t be sent directly into an electronic device. The temperature difference in a body-worn harvester is generally only a few degrees, so it will generate just 25–50 millivolts (0.025–0.050 volts). Despite recent advances, electronic devices still typically require one or two volts to function properly. The amount of power such a harvester can generate is likewise tiny. And changes in external temperatures will cause the voltage and power generated by the harvester to vary, potentially damaging the device it’s running.

Increasing the harvester’s energy output is not feasible: its voltage is directly proportional to the temperature difference, and that relationship can’t be changed. “So, to create a practical harvester system, we needed to add an interface circuit that could continuously deliver as much of the harvester’s output as possible to the electronic device in a form that it could use,” says Ramadass.

Conventional approaches to designing an interface circuit wouldn’t do the trick. For one thing, a conventional system for voltage conversion would burn up all the available power, even when it’s sitting idle. In addition, transistors used as switches in electronic circuits won’t start operating below 1 V. Several groups designing body-worn harvesters use a battery to provide that startup voltage, but that approach would defeat the main goal of the MIT team – to go batteryless. An interface circuit suited to this application required some serious innovation. 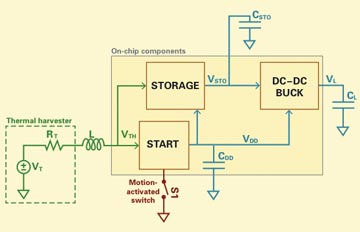 This circuit – shown above in a simplified overview – adapts the electrical output of a wearable power generator so that it can run an electronic device in place of a battery. The commercial thermal harvester at the left produces a tiny flow of power from the temperature difference between the surface of the skin and the ambient air. The power passes to the STORAGE block until its voltage is sufficiently high. It is then released to the DC-DC BUCK, which lowers the voltage and maintains it at the level required by the electronic device at the end (not shown). Key electronic components will not start up at the low initial voltage, so the circuit includes a motion-activated switch (shown in red) that turns on just long enough to raise the voltage to the critical level, thereby jump-starting the electronic circuit without need for a battery.

This figure shows a model of the basic architecture of the MIT interface circuit. In this overview, the harvester (drawn in green) and the three major blocks (in brown) contain many components and connections. Shown separately are the capacitors (C), which are used to store and accumulate electric charge as needed to control the flow of power through the circuit.

During continuous operation, the 25–50 mV generated by the thermal harvester flows to the STORAGE block, which is designed to extract as much energy as possible and store it on the large capacitor called CSTO. Whenever the charge on CSTO exceeds 2.4 V, a switch opens and allows the energy to move onto the DC-DC BUCK, a converter that brings the voltage down to the level required by the electronic device – here 1.8 V – and keeps it steady as it is being used.

When the circuit is first starting up, the charge from the harvester is not sent to the STORAGE block but rather is stored temporarily on an external inductor (L), another type of storage component. To generate the voltage needed to “cold-start” the electronics, the design includes a special START block controlled by a switch run not by electricity but by vibrations. Inevitably, a person wearing a harvester will move a bit (swing an arm, shift a leg, look around). The resulting vibrations cause the motion-activated switch (a mechanical spring) to open and close – and just once is enough. During that time, current that has accumulated on the external inductor while the switch was closed is released and charges up capacitor CDD. When that charge exceeds 1 V, the transistors and other electronics begin to operate. The START block turns off, and power begins to flow directly from the harvester to the STORAGE block.

With so little power available, another concern is “end-to-end efficiency,” a measure of how much of the extracted energy makes it from the harvester to the electronic device. Conventional controls for transferring energy from the harvester to the device consume a lot of power, so the MIT group instead uses a simple technique that compares voltages at the various capacitors on the circuit and then switches blocks on and off as needed to minimize power consumption. Ramadass stresses the importance of using digital controls. “The traditional analog approach to control works well at high power levels, but at low power levels you don’t get good enough efficiency,” he says.

Another key to maximizing power transfer involves resistance, that is, the opposition to flow of an electric current through a material. Here, the goal is to match the resistance in the overall interface circuit to the resistance in the harvester. If there’s a mismatch, some of the power from the harvester won’t move onto the interface circuit. To ensure smooth power transfer, designers often use sophisticated algorithms to run the converter so it always matches the resistance of the energy source. But running such algorithms burns up power.

To avoid that loss, the MIT team uses a different approach. In their interface circuit, charge is sent to the big storage capacitor in discrete packets until the voltage builds up to the target level. The rate of transfer is controlled by a clock that turns transmission of the charge packets on and off. During the design process, the frequency of that on-off switching is set to a single value that can be calculated based on the resistance in the harvester and certain characteristics of the storage compo- nents. The result is that the resistances match, and they track together as temperatures change.

Tests of their interface circuit with a commercially available thermal harvester produced encouraging results. The diagram below shows the output power of the system as a function of the voltage coming from the harvester (which changes with the temperature difference). The red curve shows the theoretical maximum power available from the system, while the blue curve shows the measured power at the end of the interface circuit. 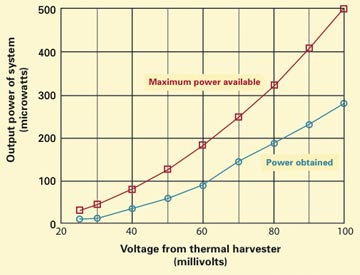 This diagram shows output power at the end of an experimental generator (a commercial harvester plus the MIT interface circuit) as a function of voltage coming from the harvester. The red curve shows the theoretical maximum power available from that system; the blue curve shows the power measured in tests with the actual device. The maximum end-to-end efficiency is 58% of the theoretical maximum, and the minimum voltage required to run the system (once it is operating) is just 25 millivolts.

“That curve captures the essence of the system,” says Ramadass. “The system starts up at 35 mV input, but once it’s started up, it operates all the way down to 25 mV, and the peak overall end-to-end efficiency is 58%.” That efficiency is higher than in any other state-of-the-art system that includes the whole process – harvester to end use – and unlike the other contenders, the MIT system both delivers a regulated voltage and continues to produce maximum power as the temperature differential changes.

Chandrakasan likes to point out another feature of their interface. “The main storage capacitor could be viewed as a battery, but it is really more like an energy buffer,” he says. “You can trickle charge it; and when you need to use it, you can burst out the energy.” He notes that devices like sensors and medical monitors often have a “peaky” type of demand. “A sensor may wake up, transmit a lot of information, and then go back to sleep,” he says. “While the sensor is sleeping, the system stores energy onto the buffer so that it’s ready to deliver another burst when the sensor next wakes up.”

The researchers are continuing to improve the performance of their interface circuit and are working to further miniaturize the whole harvesting system. In the longer term, they may increase storage capacity by incorporating new technologies such as the carbon nanotube-based ultracapacitors now being developed by MIT colleagues. They are also exploring the feasibility of having a single interface circuit that incorporates both heat- and vibration- harvesting devices and perhaps even a solar cell. Such a combined system could produce more power and would work well in situations where the energy sources vary and one or another might not always be available.

Meanwhile, the MIT team is continuing to reduce the power consumption of a range of electronic devices. “So we’re working from both ends,” says Chandrakasan. “By increasing the amount of energy generated by harvesters and decreasing the power consumption of electronic devices, we hope to make possible many new applications of these systems so we can increasingly rely on ambient sources of energy that are endlessly available everywhere.”

This research was supported by a seed grant from the MIT Energy Initiative and by the MIT Center for Circuits and Systems. Further information can be found in: