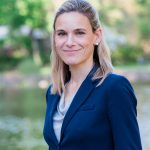 In this special seminar, Secretary Katie Theoharides of the Massachusetts Executive Office of Energy and Environmental Affairs will discuss the Baker-Polito Administration’s ambitious action to combat climate change and ensure a clean, reliable, and affordable energy supply for Massachusetts residents. Secretary Theoharides will offer remarks detailing state efforts like the recent climate legislation, a first-in-the-nation Roadmap study on achieving net-zero in 2050, and development of offshore wind and other clean energy resources. Underscoring the importance of regional action to reduce emissions, she will also discuss the New England States’ regional electricity market reform effort, as well as the Transportation and Climate Initiative Program, a multi-jurisdictional regional cap-and-invest program.

In 2016, Secretary Katie Theoharides joined the Baker-Polito Administration as director of climate and global warming solutions in the Executive Office of Energy and Environmental Affairs. Prior to her appointment as secretary, Theoharides served as the Administration’s undersecretary of climate change. As undersecretary, she led the State Hazard Mitigation and Climate Adaptation Plan and created the Municipal Vulnerability Preparedness program, which has awarded $44 million since 2017 to support priority climate resilience projects, with 89% of municipalities across the Commonwealth enrolled in the program.

Since her appointment as secretary in May 2019, Theoharides has spearheaded key initiatives to advance the Administration’s climate, clean energy, and environmental agenda, including establishing a nation-leading target of net-zero greenhouse gas emissions by 2050. To achieve that ambitious goal, Theoharides led a first-in-the-nation, two-year planning process culminating in the Administration’s 2050 Decarbonization Roadmap, which outlines the policies and strategies the Commonwealth will need to reach net-zero over 30 years. Theoharides also played a key role in negotiating comprehensive, nation-leading climate legislation signed by Governor Baker in March 2021, including key provisions related to environmental justice.

As chair of the Transportation and Climate Initiative Leadership Team, Theoharides helped to launch a groundbreaking multi-jurisdictional program with Rhode Island, Connecticut, and Washington D.C. that will reduce motor vehicle pollution by at least 26% and generate over $1.8 billion in Massachusetts by 2032. Theoharides has also led the Administration’s efforts to bring offshore wind to the Commonwealth.

Trained as a field biologist, Theoharides began her policy career working in Washington, D.C. at the National Sustainable Agriculture Coalition and Defenders of Wildlife. After returning to Massachusetts, Theoharides served as the executive director of the Hilltown Land Trust, and founded Theoharides Consulting, which provided climate and environmental policy analysis, strategic planning, and facilitation to universities, government agencies, and non-profits.