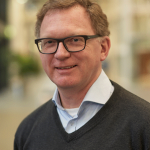 In this talk, Dirk Smit—vice president of research strategy, chairman of Shell Science Council, and chief scientist in geophysics at Shell—will address the transition to a net-zero-emission (NZE) energy system, associated opportunities and tradeoffs, and how regional aspects prioritize and shape the challenges associated with them.

The transition to an NZE energy system will involve a diversification of energy sources, including the production of energy sources with much lower power densities, such as renewable energy sources. While an NZE energy system presents tradeoffs including lower power density, dealing with these trade-offs is fundamentally different than in the current fossil hydrocarbon dominated system. The very nature of an NZE system requires that energy production businesses will now need to include more “circular” processes, in which both the production as well as the energy usage become part of an integrated system optimized to reduce environmental impact (in particular, carbon dioxide emissions) and optimize profitability. In an NZE system, there are also more options for energy products and opportunities in different and new energy markets.

How profitable businesses may develop in the U.S. or other countries depends on several factors, among which are geography and state of economic development—not just technology. As a result, societies in different regions will approach such optimizations very differently. However, most important technology innovations are needed in systems design and engineering in three areas: energy storage, carbon capture and storage and utilization systems, and nature-based-solutions, which will be at the core of most future NZE systems.

Dirk Smit graduated from Utrecht University in 1989 with a PhD in mathematical physics, string theory. He went on to complete an academic post-doctorate at Berkeley and was awarded a post-doctorate at Harvard University. He joined Shell’s Geophysics R&D department in the Netherlands in 1992.

Smit holds several positions outside Shell: He is a member of the MIT Advisory Board for the Department of Earth, Atmospheric, and Planetary Science (EAPS) and recently has become a fellow in the EAPS Earth Research Lab. He holds a visiting professorship in geoscience at the Chinese University of Petroleum in Beijing and is an adjunct professor in geosciences and an advisor to the president at the Indian Institute of Science in Bangalore, India. He serves on numerous university advisory boards in The Netherlands, China, and U.S. Smit served as a member of the National Research Council on Solid Earth Observations in the U.S. and is currently a member of the National Dutch Science Board for Basic Science Research in The Netherlands.

He received the Ludwig Mintrop Award in Geophysics from the EAGE in 2002 and was elected Fellow of the American Physical Society (APS) in 2020.

In his spare time, Smit is an amateur astronomer and, together with his son, enjoys searching the deep skies through an 11-inch SCT (telescope) during long Dutch winter nights.