Cleaning water without the grid

Amos Winter may be an assistant professor of mechanical engineering at MIT, but he describes one of the most important aspects of his job as “detective work.” That’s what he, MIT PhD candidate Natasha Wright, and their fellow researchers did for two years before coming up with a potential solution to issues of clean water access in India.

It paid off. Their research team, sponsored by the MIT Tata Center for Technology and Design and its partner, the Indian firm Jain Irrigation Systems, won the United States Agency for International Development (USAID)’s Desal Prize earlier this year with their design of a solar-powered electrodialysis desalination system.

The detective work began when Jain Irrigation pointed out that small-scale farmers in India who use Jain’s irrigation systems often lack access to safe drinking water. Winter, Wright, and others on the Tata Center team spent two years meeting with farmers and village dwellers trying to understand the reason for drinking water shortages in rural Indian communities.

They expected the villagers’ primary concern to be contamination of water by bacteria. But in their meetings, the team identified another, generally overlooked contaminant in India’s water: salt. “What can happen frequently,” Winter says, “is that people who only have access to a salty drinking source won’t want to drink [the water] because it tastes bad. Instead, they’ll go drink from a surface source like a pond or a river that can have biological contaminants in it.” By removing salt from water sources, the team could more than double the groundwater available to villagers for drinking. 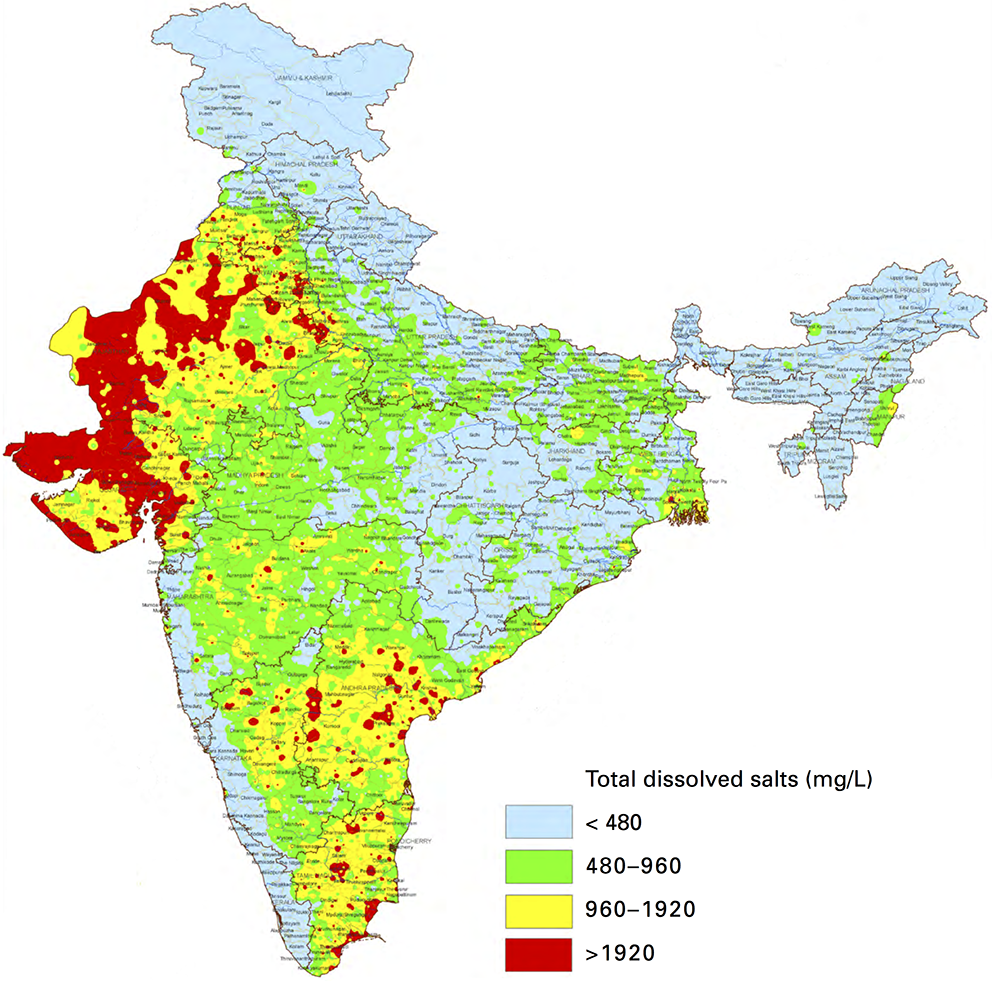 This map shows salinity levels in Indian groundwater. Groundwater with a salinity level greater than 480 milligrams per liter (mg/L) underlies 60% of the land area in India. At this level, the aesthetic quality of the water is compromised. Map: Central Ground Water Board, Government of India

The announcement of the USAID Desal Prize competition hit shortly after the team published a paper on the importance of desalination to clean drinking water. Background research already in hand, the team connected a trailer containing their prototype system to a Tata Center–supplied truck and drove it to the competition in New Mexico. And in a pool that had close to 70 applicants, they won. In fact, they were the only entry to meet all of USAID’s specifications for flow rate and salinity.

The win was game-changing. According to Winter, the Desal Prize has seriously accelerated the typical development timeline for a project like this. Winning the prize has connected him and Wright with other major players in the clean water space, and international expertise provided by USAID has put more potential locations for the new desalination system on the team’s radar. One of them is Gaza. “It’s pretty exciting,” Winter says, “because the needs and requirements for off-grid desalination [in the Middle East] are very similar to those in India.”

First, though, the team has to work out a few kinks in the technology. Winter identifies two major “pain points”: the overall materials cost of the system and the energy needed to pump water through it. The only “real necessary power” for running the system is the power required by the electrodialysis technology to separate the ions of salt from the rest of the water, Winter says. Cutting down other energy consumption would both conserve power and bring down cost. 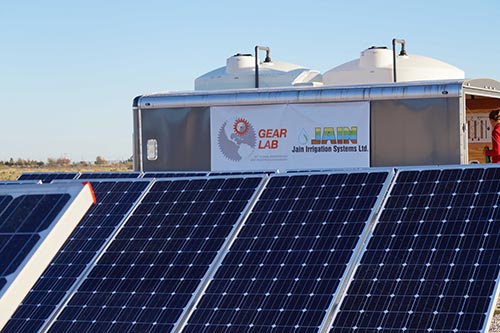 The Tata researchers drove their entire system down to New Mexico in the trailer shown above. The day before the USAID Desal Prize competition began, they removed the solar panels from the trailer and set them up. 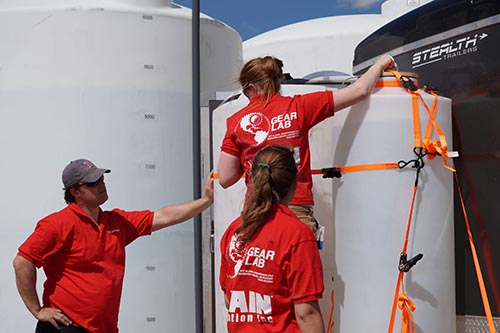 One way to cut cost could be to wean the system off battery usage. In fall 2015, the team began researching whether their system could run effectively on solar energy without using batteries as a buffer to store energy when the sun is down. The research involves conducting pilot tests in which farmers come to one of Jain Irrigation’s test farms in India and use the system in real time. Their experience will shed light on whether demand for water throughout the day aligns with the availability of solar energy.

Winter and Wright have also just signed a three-year contract with Tata Projects, an engineering subsidiary of the Tata Group currently focusing on village-scale water systems. Tata Projects already has a well-developed reverse-osmosis water-purifying operation, but it wants to expand to off-grid communities—places where solar-powered electrodialysis desalination would be a better option. Tata Projects is also looking into the possibility of using the technology in specific subsets of urban environments, such as apartment complexes. “There are a number of market opportunities for this technology beyond just small-scale villages,” Winter says.

The work, of course, is far from done. “The research that we’re doing now, and that the Tata Center in general does, involves tackling problems in emerging markets that require high-performance but relatively low-cost solutions,” Winter says. “We don’t just say, ‘OK, we’re going to make a technology [in our lab] and then see if we can commercialize it.’ We try to understand from the start the user-centered, real-life requirements for a technology so we can design to meet them.” Not elementary at all, but certainly the work of good detectives.